The dream – road to Financial Freedom: Towards the end of last year, we published an article titled  Americans favour coffee to stock market investing where we demonstrated that an overwhelming majority drink coffee as opposed to investing in the stock market’ 61% of Americans drink coffee on a daily basis as opposed to the 48% that invest in the market. On an annual basis, Americans spend about $1200 on coffee. If they put this money into the market and allowed compound interest to do its magic, it could grow into a nice tidy sum over a period of 20 years.

The latest data provides even more attention-grabbing data. Starbucks is one of the most popular places to get a cup of Java from, even though (in our opinion) it does not come close to ranking as the best place to have a cup of coffee.  The picture below illustrates just how much people love their daily coffee. 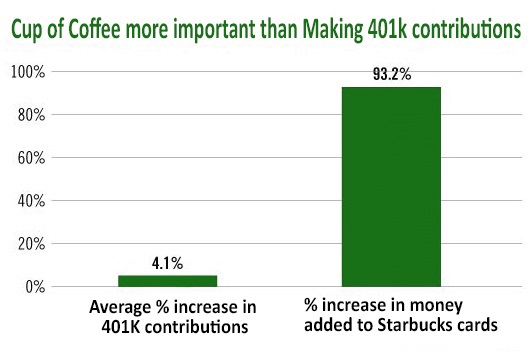 Individuals are more interested in loading their prepaid Starbucks cards with money as opposed to contributing to their 401K plans. This is a clear illustration of how people today are more concerned with how they look or what image they portray as opposed to building a sustainable nest egg. S&P Global Market Intelligence states that Starbucks has $1.2 billion in unspent funds; these are funds that customers have added to their prepaid cards.  In 2014, the same customers added $614, Million, so the jump to $1.2 billion is actually stunning. This is more than the total deposits some banks take in for the year.  In the same period, the average contribution to a 401K increased by a measly 4.1%.

From a psychological perspective, it reveals that the majority have still not embraced the markets. According to bankrate.com, a significant portion of the population states that they don’t have enough money to invest in stocks. Based on the chart below, 53% don’t have enough money to purchase stocks, and 21% don’t know enough about stocks; this does not bode well for the current generation. However, these chaps seem to have no qualms about purchasing an overpriced cup of coffee that they could easily make at home. 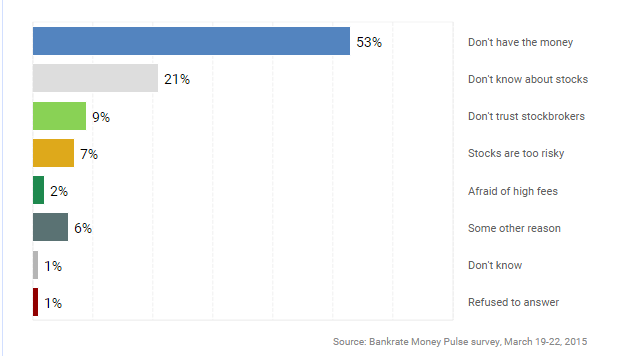 We have spoken at length on topic of financial freedom and as we have noted previously the small miserable rate hike the Fed initiated is not the beginning of a new trend but a desperate effort on its part to convince the masses that this economic recovery is real. Any person with a grain of common sense understands that the only thing driving this economic recovery is hot money; if the supply of hot money is cut, the recovery will end instantly.   This is why nation after nation continues to jump onto the negative rate band waggon and it is just a matter of time before the Fed is forced to join the party. When negative rates hit the US, it will propel corporations into taking, even more, risk.  We suspect share buybacks will surge to levels that might make the current purchases seem sane in comparison.

The Fed’s strategy all along has been to foster an environment that favors speculators and punishes savers, destroys financial freedom and they have succeeded in achieving their objective. The next stage will be to force these savers to speculate, and that is when we can expect this market to enter into the bubble phase. The Fed’s sole purpose since it began interfering with free market forces has been to facilitate boom and bust cycles.  This bull market will only end when the masses finally give into it and in doing so set the stage for a bubble. History is replete with examples of how bull markets end. No bull market has ended without mass participation; the crowd has to turn euphoric before the bull kicks the bucket.